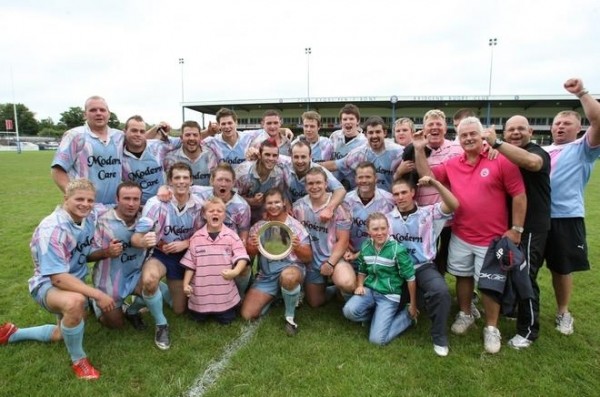 In front of a 500-strong crowd, Valley Cougars were crowned Welsh Champions for the very first time as they beat Blackwood Bulldogs 26-12.

The previously unbeaten Bulldogs, despite scoring first in each half, failed to rise to the big occasion, as the hard working and well drilled Cougars, who this season have played out of Nelson RFC, deserved their Grand Final success.

The nomadic Cougars, who have previously played out of Abercynon, Pontypridd, Pontyclun and Ferndale, finished bottom of the Welsh Conference in their first two years.

Blackwood stormed into the lead from the first set of six in the game when Byron Williams went under the sticks in under 60 seconds. Paul Emmanuelli converted.

Cougars hit back on 17 minutes after a long period of intense pressure when James Allen leapt over from dummy half. Ceri Cummins did well to add the extras to level the scores.

And they took the lead on the half-hour when Cummins kicked a penalty, given for offside, from 40 metres out.

Cougars went into the break with a 12-6 lead. Bulldogs failed to realise that they were on the final tackle and didn't kick the ball upfield giving their opponents possession on Blackwood's 30-metre line. They didn't waste the opportunity and following a well-worked set, Sam Coombes laid the ball off to Stephen Parry who grounded in the corner.

Bulldogs could have had a try back before the interval but Kristian Perry was stopped short of the line. Gareth Price also dropped the ball as he was running down the wing.

However they levelled things after only a minute of the second half when Gareth Hutchinson ran three quarters of the length of the field to score under the sticks which Paul Emmanuelli had no problems converting.

Cougars responded straight away. Rhodri Morris offloaded beautifully to Parry who slipped through the Bulldogs backline for his second. Parry converted again.

Both teams were reduced to 12 man for 10 minutes following a fight between Blackwood's Trevor James and Cougars' Sam Coombes.

Cougars were first on the board following the incident when Cummins kicked a penalty.

Things went from bad to worse for Blackwood when Paul Emmanuelli was also sinbinned.

And finally, Parry stormed over for his hat-trick on 77 minutes to seal the win which Cummins converted.

The Cougars now go onto represent Wales in the National Conference Premier Semi-Finals when they will face the south of England Champions at Gloucestershire Warriors ground on Sunday 24th August.