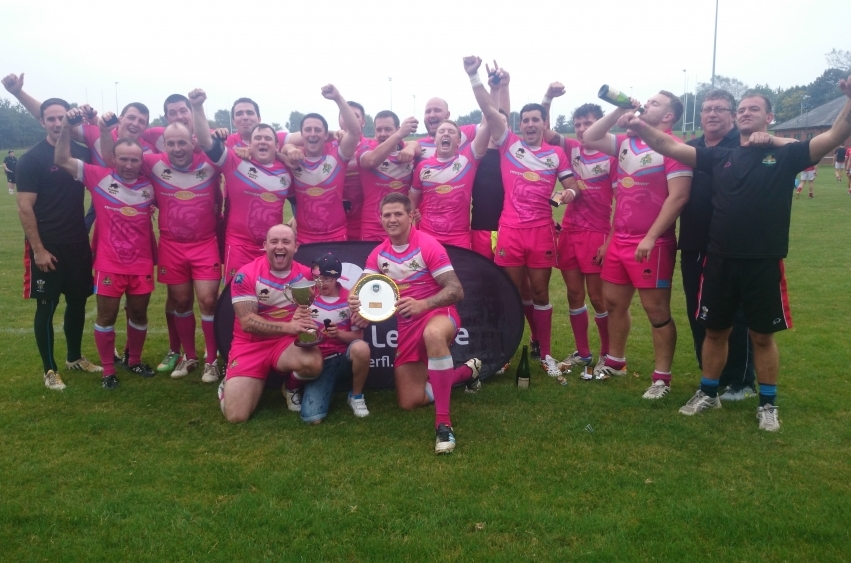 By Ian Golden at Lichfield RUFC

Sheffield Hallam Eagles lost for the first time in 33 games as Welsh side Valley Cougars, the feeder side to South Wales Scorpions, won the Conference South title in dramatic fashion at Litchfield on Saturday.

The final score was 19-10 and it was anyone’s game right up until the last five minutes when a masterful try, created by Paul Emanuelli and finished by Danyl Davies, wrapped things up to defeat the holders.

It was a tough battle for both sides throughout the game and with a number of high tackles and three sinbinnings, it was always going to be the side who kept their cool who would win the game.

First chance of a try came to the Cougars, Gethin King kicked and Carter dived but the referee pulled it back for a scrum.

However Eagles took the lead on 14 minutes when a man with a distinct Welsh name Jordan Parry scored in the corner. The conversion was missed.

There could have been a second fairly soon after but Jono Burns was pulled back for a forward pass.

The Eagles were given an advantage just before the break when Darryl Carter was sinbinned for continual foul play but it was Cougars who scored against the numbers when Zak Williams barged through. Paul Emanuelli converted.

The Welsh couldn’t hold on. A mistake from kick-off led to Mitch Vincent making a 50 metre clean break to give the lead back to the Eagles. Jack Mitchell converted in the last move before the break.

Sheffield had five minutes left before Davies came back on but they couldn’t take advantage. The nearest they got to another try was when a poor pass from Thomas Ashton led to Santino Decaro dropping the ball with almost a clear run to the line.

Eagles’ Alex Palmer was yellow carded for foul play on 57 minutes and Cougars made use of the extra man when Mikey Rowe forced his way over and Emanuelli converted well from the touchline.

But it was in their next attack that the Cougars pulled off a touch of class to take the trophy. It looked like Emanuelli was going to go for another one pointer but instead he dummied and played it out left where Davies was ready to jink through the tiring Eagles backline.

A Connor Scott sinbinning rubbed it in for the Eagles in the final minute but it mattered little as Eagles were left disappointed and the Welsh ecstatic.