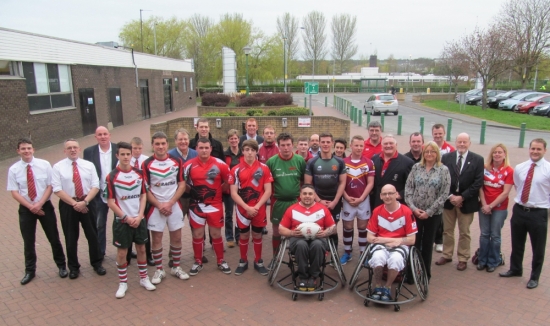 Conwy Celts won the North Wales Conference for the second year running with 50-30 success over Flintshire Falcons in the Grand Final.

The Celts headed into the game as clear favourites, but they were made to work for what, in the end, turned out to be a fairly comprehensive victory.

A double from man of the match Ed Watson and efforts Lewis Stockton and Jordan Sheridan, with the Falcons’ tries coming from Jono Reid and Billy Forrester, gave Conwy a slender 20-18 lead at the break.

And although the Falcons kept up the tempo in the second half, with the scores level at 30-30 after 55 minutes, fitness in the final quarter proved key in the Celts’ win.

Ed Weston showed great strength down the left edge to cross for two early tries, before Jono Reid replied for the Falcons, bouncing off three would-be tacklers to squeeze over next to the posts.

It took just a matter of minutes for the Falcons to grab their second and take the lead for the first time; a floating kick to the corner from scrum half Goos was collected by Forrester.

However, Lewis Stockton broke down the left wing to finish under the posts as the Celts replied, and Jordan Sheridan added their fourth with half-time approaching.

An eight-point advantage would have put the Celts in a perfect position at the break, but Forrester darted over for his second on the hooter to reduce the deficit.

The Celts started the second period superbly with two quick-fire tries. Firstly, Lee Davies bulldozed his way over the line and then Sheridan grabbed his second, supporting a break up the middle.

Once again the Falcons came up with a quick response, though, with two efforts in the left corner.

But that was as good as it got for Flintshire as the Celts dominated the closing stages.

Josh Ward broke through the middle and showed great pace to finish underneath the posts, before Ed Weston capped off a solid all-round display with his hat-trick try.

And Sean Powell put the icing on the cake on the hooter, bursting through two or three challenges on the right edge to finish in the corner.

Losing coach Mark Parry was delighted with the effort that his players put in.

He said: “All the lads 1 to 18 gave their all. There were a few new signings ahead of the game that had to bed in, but I’m really pleased with the effort that all of our lads for the Falcons put in.”