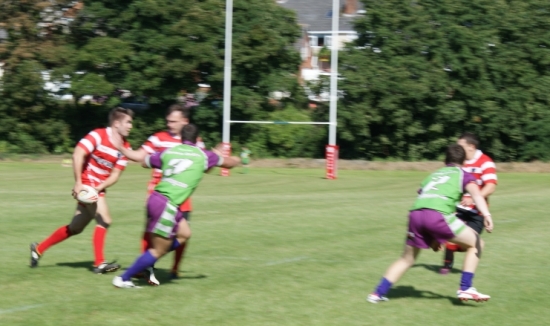 It was an outstanding match, played after fans had enjoyed a curtain-raiser of junior rugby as the young talent, who are likely to be part of the Conference in years to come, put on some great displays for the crowd.

Watched by Welsh Rugby League president Mike Nicholas, who had travelled from Neath to Colwyn Bay RFC’s ground, the game started with a bang as Dale Blackmore grabbed the first try for the Panthers.

It went unconverted but that seemed to get the Celts into gear and they had their reward when Panthers gave away a series of penalties to allow Ed Weston to score his first try of the match, which Spencer Lumby converted.

Weston grabbed a second later on, with others coming from James Gregson and Lee Davies, all of which were converted by Lumby.

And, at 24-4 in front at half-time, Celts had a big buffer over the Panthers. Davies got a second try after the break, while Panthers then had a player sent to the sin-bin for foul player and knew from there they would have a mountain to climb to get close to lifting the trophy.

But they gave it a good shot and hit back with Conor Kelly getting a try, converted by Anthony Tilley. But two more tries from Weston and Tom Baumont, which Lumby also converted, put the Celts out of sight.

The Celts tried to play some risky rugby with the game seemingly in their pocket but a clumsy pass gave Panthers’ Paul Shelwood the chance to intercept and race 80 metres for a great try that Anthony Tilley converted.

The Panthers finished on top as they still showed the determination of the side who were the league leaders before the Grand Final. They scored two further tries by captain Ben Smythe and Anthony Tilley. Tilley converted Smythe’s try, but after a superb all-round kicking game, was unable to converts his own.

Mike presented the trophy to the Celts at the final whistle and awardd the man of the match award to Celts’ Matt Jones.