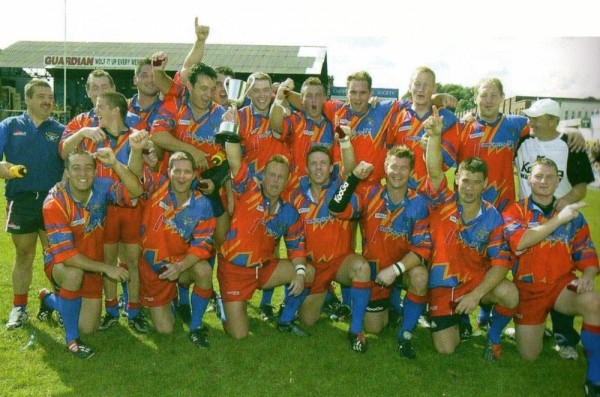 In a magnificent game; the power and dexterity of Bev Risman Medal winner Karl Hocking, alternating between prop and loose forward, midfield solidity of Allan Bateman, industry of Marcus Sainsbury and superb kicking of John Williams allied to Ellis’s guile and passion was just enough to beat the Centurions for whom two try Paul McGee was outstanding.

The Warrington crowd who came early in numbers for their Super League encounter with Halifax witnessed a classic, and their passionate enthusiasm, principally for their former favourites, produced the perfect backdrop.

Bulls dominated the opening quarter, with Ellis buzzing effectively around in midfield, a reason why Carlisle coach Gary Murdock selected himself on the bench as a potential antidote.

Carlisle’s over-eagerness in the tackle saw them concede early penalties; a fine move involving Nathan Strong, Ellis, John Devereux, Hocking and Lenny Woodard was ended by a flop which saw Williams land the opening points in the fourth minute.

Defences dominated, with Paul Morgan and Richard Massey prominent, but Bridgend looked the more expansive, Geriant Lewis wasting their best opportunity when knocking on after Ellis, Devereux and Williams had created the overlap.

A second penalty success by Williams after Bateman had been caught high by Martin Stalker made it 4-0 but only a vital Ellis interception denied a fine Carlisle counter instigated by Eddie Robinson and Mike Marsden.

Bridgend claimed the opening try courtesy of the first of Hocking’s expert offloads giving Woodard a run before Ellisâ bomb on the last tackle caught out Craig Stalker and Williams had just enough power to squeeze in at the corner and converted his effort magnificently from touch.

A fantastic tackle by Dean Haney forced Geriant Lewis to knock on from the restart and from the resultant scrum Dale Semple ghosted through the Welsh defence to lay on a perfect pass for McGee to score.

That seemed to spur on the Centurions, Richard Campbell making a half break and James Mackay launching himself over the line, only to lose the ball in a posse of scrambling defenders.

The pressure told as Carlisle ran two consecutive penalties around the Bridgend ten metre mark and with a well-executed scrum-base move, Robinson sent Craig Stalker angling to the corner to make it 10-10 in the 35th minute.

It looked as though the Bulls were wobbling but they hit back immediately after Haney had been deemed to have caught the restart with a foot in touch, Ellis’s cut out ball allowing Bateman’s long pass to put Mike Davies in at the corner, Williams again converting.

A minute after the break and the lead was extended, Carlisle surrendering position on their own ’40’ and Hocking producing another magical pass to send Dan Shore powering over in the corner. Three tries in ten minutes, timed with Murdock’s reassuring arrival, put the Centurions into the lead for the first time.

McGee’s break and chip which forced a drop out set the position and Murdock, Robinson and Semple freed Campbell, whose nimble footwork on the inside took him across.

Before Bridgend could regroup Murdock’s great pass on the inside sent McGee stepping effortlessly to the line to make it 22-20 and on a Murdock inspired powerplay, Semple chipped over, hacked on and Chris Sawyers won the race to the ball.

Carlisle were dominating possession, but Robinson knocked on in his own half to concede a turnover and Strong’s fantastic smuggled pass sent Hocking over. Murdock, Campbell and Richard Nicholson threw everything at the Bridgend line but their defence remained steadfast with Shore and Bateman outstanding.

Another Robinson misfield led to the Bulls’ next try, Woodard making great ground up the middle before Ellis’s long pass and Hocking’s judicious short one sent in Mike Davies to make it 30-26.

Ellis was outstanding in the closing stages, his kick and chase putting Carlisle on the back foot and his field goal adding to the pressure as the clock wound down. Carlisle were caught offside wide out on their own ’20’ in the 76th minute and Williams’ sixth successful conversion sealed a win that will be much celebrated in the Principality, and could have much wider significance for the future of the game in Wales.